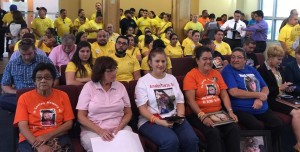 When Valley Interfaith leaders learned that the Edinburg Economic Development Corp. (EDC) was planning to slash funding for workforce development program VIDA, they immediately set up meetings with municipal elected officials to identify and ensure City funds to make up the gap. While they discovered that the Mayor and one councilmember was completely on board with the proposal, leaders soon learned that the other three commissioners (a new majority) were planning to slash funding.

One commissioner, despite professing to having his "heart touched by the testimony of the students" told leaders that he might consider an investment of $50K (as opposed to the $290K previously funded by the EDC). In response to Valley Interfaith's vocal rejection of his crumbs, he told leaders they were "going to have problems" if they did not change their attitude.

Instead, leaders changed tactics, flooding the following budget hearing with 300 VIDA students, graduates and Valley Interfaith leaders to demand a full restoration of funding for VIDA. Promising the three opposing commissioners that "we will remember you in the next election," leaders filled the room beyond capacity, spilling out into the hallway and outside. When one of those commissioners proposed the city fund the project by $250K (representing a $40K cut), the proposal was met with silence.

In contrast, when the Mayor proposed directing the full $290K to the project, leaders responded with thunderous applause. When the supporting councilmember seconded the proposal, leaders started whistling in approval. Seeing the opposing commissioners shift uncomfortably in their seats, the Mayor pounced on the one soonest up for reelection, inviting him to third the proposal. He reluctantly accepted and the vote passed unanimously - thus securing Edinburg funding for long-term workforce development.