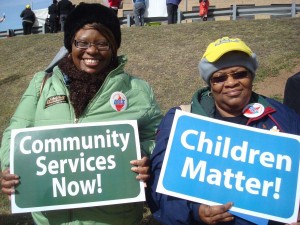 "Hundreds of people gathered Tuesday on the front steps of the Capitol to rally in support of Medicaid expansion....Willie Bennett, along with 45 other members of the Dallas Area Interfaith, turned up for the march that snaked down Congress Avenue and up to the Capitol. Bennett said more than 3,000 individuals and 38 institutions had signed up in favor of Medicaid expansion."

"Anderson and her 66-year-old mother, Martha Anderson, were among about 60 Tarrant County residents who gathered at the St. Andrews United Methodist Church in Fort Worth ... for the 200-mile bus trip to Austin. The trip was organized by the Allied Communities of Tarrant (ACT)" in coordination with the Network of Texas Organizations, including Austin Interfaith, The Border Organization, EPISO, Border Interfaith, TMO, WIN, WTOS, Valley Interfaith and COPS / Metro Alliance.