The Origins of Valley Interfaith 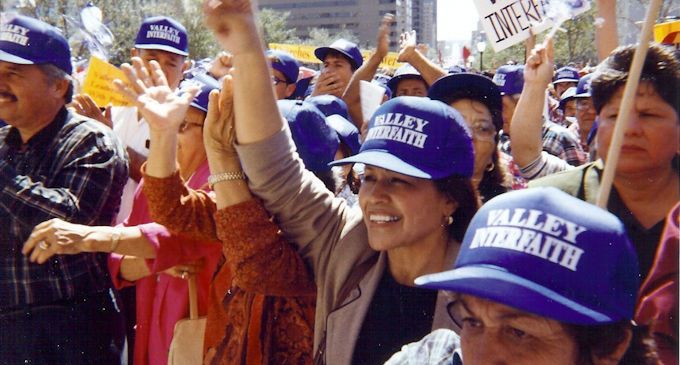 The Lower Río Grande Valley has long been one of the more neglected regions of Texas. Despite the long-standing faith of Valley residents in traditional politics, they rarely received the benefits of the state’s growing wealth.

One important factor in this lack of political influence was the division of the Valley into many competing factions. The region is divided into more than 30 cities and towns. It contains 34 independent school districts. Rather than a history of cooperation for common interests, the valley had a history of often bitter competition for the resources to build the roads, hospitals and schools taken for granted in other parts of the state.

Few in Texas believed that the Valley could ever be organized.

Church and community leaders, however, had a different vision. In 1982, Bishop Fitzpatrick and the Oblates of Mary Immaculate invited the emerging Texas IAF Network to lay the groundwork for a broad-based organization to bring together the parishes and congregations of the Valley. After two years of work, thousands of individual meetings, hundreds of house meetings, and hundreds of training sessions, 6,000 leaders from every city in the Valley gathered at the McAllen Civic Center. They met with the governor of Texas and called for education reform. More importantly, they created Valley Interfaith, a community of shared interests.

Building upon this first, uniting action, Valley Interfaith has gone on to win significant victories to improve families’ lives in the Rio Grande Valley:

Valley Interfaith, in alliance with other Texas IAF Network organizations, took the lead in conceiving, writing, and passing the colonias legislation. The first bill, upon ratification by the voters of Texas, authorized the issuance of $100 million in general obligation bonds for low interest loans to acquire, improve, extend, and build water and sewer service in the colonias.

An aggressive voter-registration and get-out-the-vote campaign statewide led to the passage of two bond proposals providing $250 million for water and sewer projects matched by more than $200 million in federal funds. By 1999, water and sewer services had been funded for more than 159,000 Valley residents.

In June 1984, Valley Interfaith was instrumental in helping to pass House Bill 72, the education reform bill. It brought $127 million annually in new funds to Valley Schools.

In March 1986, Valley Interfaith requested and received an Attorney General’s opinion affirming that Spanish-speaking students in the first grade should be tested in their native language.

In 1985, Valley Interfaith leaders helped to create the indigent health care stem for the State of Texas.

Valley Interfaith was instrumental in establishing a pilot health care project in one of the largest colonias, Cameron Park, dramatically improving the health of expectant mothers and young children. Valley Interfaith furthermore promoted the opening of a pediatric wing to serve poor children at South Texas Hospital.

Valley Interfaith worked on these and other issues in fulfillment of their motto, “without vision, the people perish” (Proverbs 29:18).

Valley Interfaith built the political will for the creation and funding of the Valley Initiative for Development and Advancement (VIDA), a labor-market intermediary that has trained and employed 1,000 Valley residents in high-skilled, high-wage jobs.

In 1998, Valley Interfaith leaders initiated a Living Wage Strategy to change the culture of poverty wages that weakens families and cripples the workforce. By 1999, action by Valley Interfaith action led to the raising of wages for 3,400 low-wage, public sector workers, pumping over $10 million into the local economy.

Beginning with Palmer Elementary in Pharr in 1991, the Alliance Schools initiative in the Valley grew to include 21 Alliance schools in eight Valley school districts. Valley Interfaith Alliance Schools have organized hundreds of parents, educators, and community leaders to work together for higher student achievement and increased parental participation and leveraged a total of $835, 000 for the innovative deregulation and restructuring of campus culture.